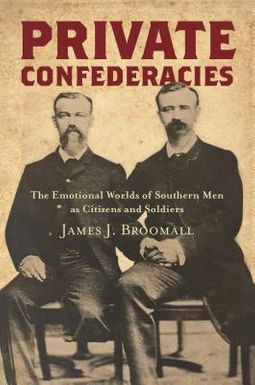 Written by Dr. James Broomall, Director of the George Tyler Moore Center for the Study of the Civil War.

How did the Civil War, emancipation, and Reconstruction shape the masculinity of white Confederate veterans? As James J. Broomall shows, the crisis of the war forced a reconfiguration of the emotional worlds of the men who took up arms for the South. Raised in an antebellum culture that demanded restraint and shaped white men to embrace self-reliant masculinity, Confederate soldiers lived and fought within military units where they experienced the traumatic strain of combat and its privations together--all the while being separated from suffering families. Military service provoked changes that escalated with the end of slavery and the Confederacy's military defeat. Returning to civilian life, Southern veterans questioned themselves as never before, sometimes suffering from terrible self-doubt.

Drawing on personal letters and diaries, Broomall argues that the crisis of defeat ultimately necessitated new forms of expression between veterans and among men and women. On the one hand, war led men to express levels of emotionality and vulnerability previously assumed the domain of women. On the other hand, these men also embraced a virulent, martial masculinity that they wielded during Reconstruction and beyond to suppress freed peoples and restore white rule through paramilitary organizations and the Ku Klux Klan.