Tom Howard: Heat of the Knight 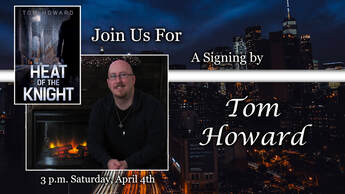 Saturday, April 4th, 3-5 p.m.
Mark your calendars and prepare to dive neck deep into the macabre as Tom Howard comes to Four Seasons Books from 3-5pm on Saturday, April 4th. He will be signing copies and talking to all comers about his murder mystery, Heat of the Knight. With thrills and suspense on every page, it's sure to be a good time.

A year-old cold case resurfaces when evidence is brought to the attention of former NYPD Homicide Detective, Richard Knight and his partner Ian Brooks. They are shocked to not only find out they knew the victim, but also that an identical murder had taken place only two days prior – women lying on their beds, carefully preserved like Sleeping Beauty awaiting her prince. However, clutched in their folded hands they hold their own hearts. Was this a crime of passion? Or a case of revenge? 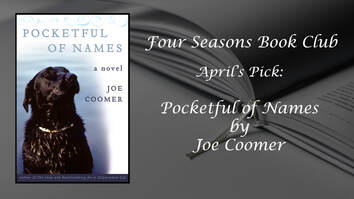 In this booksellers' favorite and two-time Book Sense pick, Joe Coomer offers the rugged yet stunning beauty of Maine and the lobstermen and their families who are dependent on the sea for survival. Pocketful of Names is a deeply human tale about the unpredictability of nature, art, family, and the flotsam and jetsam that comprise our lives.

"Coomer is clearly an author of serious talent."
--The Washington Post Book World

Partners in Crime Book Club: The Murder of Roger Ackroyd 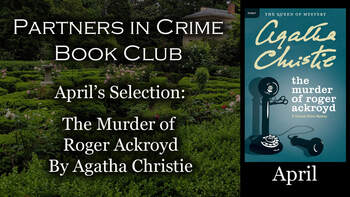 Monday, April 20th, 12 p.m.
Solve a crime or three with this bi-monthly gathering of riddlers and sleuths. Whether you're after a brief escapade with a delightful detective or looking to marvel at miraculous murders, Partners in Crime will be rally readers for a good chat. Feel free to bring a snack or sack-lunch for this noon gathering, and enjoy a 20% discount on all book club selections while you're at it. The next Partners in Crime selection will be 'The Murder of Roger Ackroyd.'

Not only beloved by generations of readers, The Murder of Roger Ackroyd was one of Agatha Christie’s own favorite works—a brilliant whodunit that firmly established the author’s reputation as the Queen of Mystery.

Alma Katsu and John Copenhaver: Writing in the Mountain State 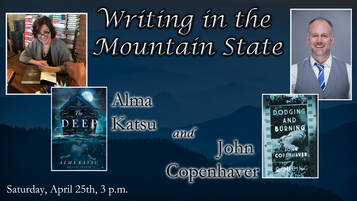 Saturday, April 25th, 3 p.m.
Join award-winning authors and West Virginian residents John Copenhaver and Alma Katsu as they discuss their latest novels, Dodging and Burning and The Deep, and why they've come to the Mountain State to write.

John Copenhaver's debut novel, Dodging and Burning, won the McCavity Award for best first mystery novel, and was nominated for the Anthony, the Barry, the Lammy, and the Strand Critics Award. He is at work on his second novel.

Alma Katsu's The Hunger made several Best Books of 2018 lists, including Barnes & Noble and The Observer (UK), was nominated for the Stoker and Locus awards for best horror novel, and won the Western Heritage Award for best novel. Her latest, The Deep, is a retelling of the sinking of the Titanic and its sister ship the Britannic, with a horror twist. 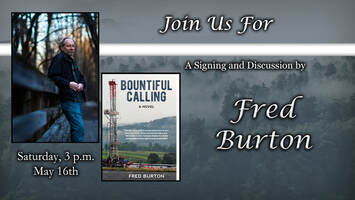 Saturday, May 16th, 3 p.m.
Join us at 3pm on Saturday, May 16th, for a discussion and signing by Fred Burton, author of Bountiful Calling, a book primarily focused on fracking in Pennsylvania. He lived in Harrisburg, Pa. for many years and, during this time, was involved in the anti-fracking movement. He attended demonstrations during which residents from the fracking regions spoke about the hardships they endured. These areas were under siege, the people collateral damage. He wanted to give voice to their struggles and that was his primary motivation for writing this book.

The book divides its focus between Harrisburg Pa., the state’s capital, and the Loyalsock State Forest area where the family you become intimate with lives. Burton draws from the surreal experience of living in Harrisburg during the early 2010s. He deftly captures the way the political and business elites withhold information about the potential harm of fracking. Equally effective is his portrayal of the paths of resistance chosen by those most affected by these policies.

Fred would like nothing more than for his book to contribute in some way to the many important, and current, topics that he writes about.